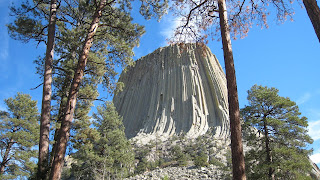 As part of my residency at the Devils Tower, I was asked to submit an essay to the Tower Storybox answering the question, "What does the Tower mean to you?" This past week I was fortunate to attend the third annual writers retreat up north near Perham at a quaint little cabin on Dead Lake, hosted by author Julie Saffrin. Each morning first thing I worked on my essay, basking in the memories from the Devils Tower park and my time there.


Under the Shadow of the Tower


October images one envisions across the Northern Plains often include machinery churning up dust in the fields, leaves turning brilliant golds and reds, crisp and crunching underfoot, a full Harvest moon, warm Indian summers. As I drove west from Minnesota into North Dakota I was met instead with strong, gusty winds and a mix of nasty sleet and rain pouring down in sheets. No warm autumn imagery to greet me on this trip. My destination was Wibaux, Montana, a tiny dot of a town on the Montana-North Dakota border to do research for my book on my way to the Devils Tower residency.

For three days I trudged the cold, wet Montana landscape to “discover” all things unique to that region…lava scoria covered buttes, crushed and poured on gravel roads, coal trains, loaded full and coming from the west, huge ranches measured and divided by section roads, iron hard land with eccentric-looking buttes and breaks. Having all those images fresh in mind I was ready for the next phase of my journey…the tower.

I awoke early Sunday morning to the thud of a large branch hitting my roof overhead and a foot of heavy, wet snow. All roads west were closed. Disappointment set in as I didn’t want to miss a single day. By one o’clock I decided travel southbound should be open and struck out on my own. Dark, gray skies hovered just above the roof of my car as I drove south from Medora on Highway 85, continuing into South Dakota. The buttes and craggy outlines of the rugged landscape on both sides were covered in a glistening white garment, as though elegantly dressed for a special occasion. Unusual sandstone formations looked like an enchanted castle, offering a mystical elegance to my drive. Each mile I was encompassed by breathtakingly beautiful scenery, a royal escort of sorts, my own anticipation growing.

Around five o’clock I made a stop in Belle Fourche and turned west into Wyoming, thankful the road was open and clear. The sky remained dark, the clouds seemingly too heavy to stay in place, descending now to the ground in a misty shroud. Dusk neared as I rounded the final curve past Hulett and I caught my first glimpse of the tower jutting above the hillside in the far distance. It caught my breath. As I neared, the clouds began to lift and the sun, setting now behind it, shone through the lifting haze, basking it in a golden backdrop. There it stood, large and tall, giving the aura of something special.

I settled in to my unit at the park as an invited guest, with the purpose to write. Each day as I walked the base of the tower, glancing upward every few steps, words like strong, mighty, and fortress came to mind. Standing in its shadow I felt an assurance that the tower was there not because of a random geological formation. The strength radiating from the cracked columns of stone call those who stand in its shadow to acknowledge the Creator’s unique design, formed like none other on the earth.

To further prove its reverence, the tower is harmoniously surrounded by equal beauty…the gentle meandering curves of the Belle Fourche River, the red sandstone buttes that shimmer in the afternoon sun, golden meadows filled with Needle and Thread Grass and Western Wheatgrass. Pockets of tall, majestic Ponderosa pines whisper in the wind, shedding a soft bed of pine needles that cover the ground for the creatures that wander the landscape, often hidden in their quiet steps.

I wondered how to answer the question…what does the tower mean to me? It meant I found a sense of belonging in a place that captivated my soul like no other. I sat at my desk, weaving the scenes from Wibaux into the pages of my manuscript, cognizant of the responsibility that comes with telling a true story. The book you see, shares a powerful story of forgiveness, a message relevant to many.

As I spent time on the Joyner Ridge Trail with my back leaned up against the smooth bark of a pine overlooking the valley below, the tower cut a distinctive shape against the blue sky as I reflected on my own dreams, hopes, and visions. The setting begged me to be still and listen to God’s voice echoing across the landscape, the voice of the Great Mystery, Wakan Tanka to the Lakota people who lived under the shadow of the tower for centuries and also declared it something special.

Suddenly I understood the connection between my setting and the message in the words I was writing…the One who created the earth and everything in it is the same One who grants forgiveness. I was given a most incredible gift…time under the shadow of the tower, blessed so richly by God.
Posted by Unknown at 9:33 AM