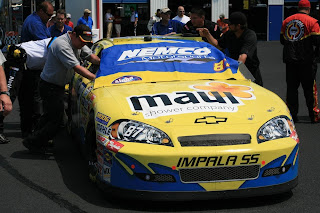 I had a fun project to work on last week. A family from our church has a business called Maui Shower, a mobile shower facility in a bright yellow-and-orange semi that they take to large-scale events like NASCAR where thousands of campers are in need of showers. Maui Shower is now in their fifth year of business and they have four semis that travel all across the United States.
The owners, Tim and Sam Watts, (father and son), were pretty excited to have an opportunity to sponsor a couple drivers at Talladega Superspeedway a couple weeks ago. I wrote a press release for them and thought I would share it here:
FOR IMMEDIATE RELEASE:

Minneapolis, Minnesota –
The Maui Shower Company teamed up with Tonya McCallister and McCallister Precision Marketing (MPM) to sponsor drivers at Talladega Superspeedway, April 24-26, 2009. In a show of support to NASCAR and the sport of racing, Maui Shower went 3-for-3, sponsoring drivers in all three events.

Sponsorship started Friday night at the ARCA series when Maui Shower took an ad on the side of Grant Enfinger’s #83 red Chevrolet. Enfinger started in the 8th position—his second start of the season—and finished 3rd, after a wild race with five cautions. Tonya and MPM took it to the next level, bringing Maui Shower a sponsorship opportunity with Joe Nemechek in both the Nationwide and Cup series.
TALLADEGA SUPERSPEEDWAY - NATIONWIDE SERIES: On Saturday, April 25, 2009, Maui Shower sponsored driver Joe Nemechek. The Maui Shower logo dazzled bright and bold on the front hood of his yellow Chevrolet Impala SS throughout the race. Driving #87, Nemechek started in 19th position and stayed clear of trouble to finish 11th in the Aaron’s 312. Television coverage was provided by ABC Sports, giving Maui Shower great national exposure.

TALLADEGA SUPERSPEEDWAY - SPRING CUP SERIES: On Sunday, April 26, 2009, the Maui Shower logo splashed across the front hood of Joe Nemechek’s #87 Toyota Camry. The highly visible spot throughout the four-hour race earned a 25-second mention by FOX Broadcasters. Nemechek started the Aaron’s 499 in the 17th spot and avoided two major crashes to finish with a season’s best at 14th .

Working in conjunction with McCallister Precision Marketing, Maui Showers is committed to the sport of racing. Look for the Maui Shower trailers on the infield at future NASCAR events throughout the 2009 season.