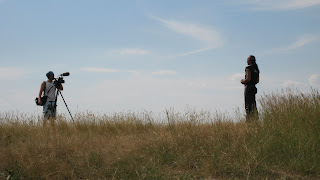 Yes, believe it or not filming has begun!

We were fortunate to join Paul LaRoche in South Dakota last month for a weekend of filming for the new television series that will premiere on RFD-TV in September 2009. We filmed part of Episode #5, titled "Rez Ride 2009"...and hope to make the motorcycle ride an annual event.

We started on the popular Iron Mountain Road in the southern portion of the Black Hills that has framed tunnel views of Mount Rushmore in the distance. It's a very popular route for motorcycles especially...numerous hairpin turns, tight curves, pigtail curves, single lane tunnels--you name it, Iron Mountain Road has it all. Even though we were there two weeks prior to the Sturgis Bike Rally, there was plenty of motorcycle traffic through the hills. It was a little tricky filming on such a busy roadway, but our fabulous crew made it work nonetheless.

We had only 3 motorcycles...which proved to be just the right amount considering the traffic and other roadside challenges. Dan and Chris Kes, from Bloomington, Minnesota; John and Barbara Marshak, and Paul and Kathy LaRoche. Next up we rode north through Nemo and Vanocker Canyon to Bear Butte, the sacred Lakota mountain on the northeast side of Sturgis. The next day we headed south and west to the Pine Ridge Reservation, the Badlands, and the Wounded Knee Memorial. The timing was perfect...shortly after we arrived at the Wounded Knee Memorial, the 4th Annual Wounded Knee Memorial Bike Ride rolled in with about 65 bikes and a number of people waiting to see them. We stayed for the ceremony as the sun began to set on the prairie...a fitting end to the episode.

In fact, as we wrapped up our final shot, in the distance we a soft chant echoed down the hillside as the ceremony came to a close. It was that perfect moment, captured on film, that happens when you least expect it. We couldn't have timed it any better if we'd planned it. It was almost surreal. I'd like to think it's a sign of good things to come for our new television series.

Until then,
Barbara
Posted by Unknown at 9:45 PM