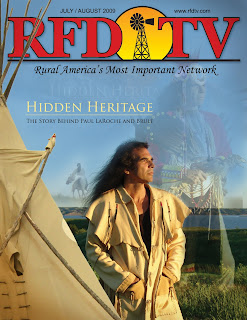 Each episode will air at Monday, 8:30 pm; Tuesday 10:30 am; and Wednesday, 7:30 am, central time zone. The television show follows Paul’s journey into Native America and is based on the book Hidden Heritage by Barbara Marshak.

Paul LaRoche, a/k/a Brulé, is an award-wining Native American recording artist from Minnesota. Adopted at birth, he didn’t discover his Lakota heritage until he was 38. Paul and his band, AIRO, (American Indian Rock Opera) have sold over a million CDs worldwide and earned seven Native American Music Awards (NAMMYs) since 2002.

HI PAUL MY NAME IS MONICA I,M FROM THE LACORELLIES TRIBE FROM HAYWARD W.I. AND I WOULD LIKE TO KNOW WHY MY FAMILY CANNOT BE ON THE TRIBAL ROLL I HAVE THE MEMBERSHIP CARD. PLEASE WRITE BACK MY INDIAN GRANDFATHER WAS A CHIEF AND MY GRANDMOTHER WAS A PRINCESS AND I,M TRYING TO FIND OUT ABOUT MY HERITAGE BUT COMING TO A DEAD STOP WHEN I TRY TO FIND OUT ANYTHING. THANK YOU MONICA ORIENT

Hi Monica,
Thank you for writing. Paul is from the Lower Brule Sioux Tribe in South Dakota and as far as I know he doesn't have any connection to the Lacorellies Tribe. I have heard it can be quite a challenge to connect to one's Native heritage when there are so few records available.

I would advise you to contact someone in the Lacorellies tribe or Hayward ancestry records. Best of luck in your journey to secure tribal membership. It sounds like you have much to be proud of as the grandaughter of a princess and chief!
Barbara Marshak,
Author of Hidden Heritage