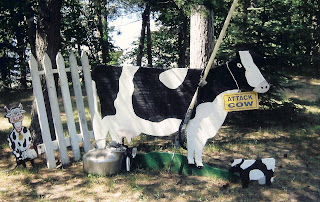 Not long ago I wrote a 'short-short' piece for a contest sponsored by MinnPost.  The article or essay had to be about Minnesota and under 800 words.  I pondered a few ideas and decided it was time to disclose a secret that until now I've only shared with close friends and family:  I'm deathly afraid of cows.  It's true.  I equate cows with the likes of grizzly bears and mountain lions.  So here's my story:

Head out along any rural roadway in Minnesota and you’ll most likely pass a herd of dairy cows or beef cattle. Poised sporadically across a serene pasture, tails swishing, munching summer grasses, they stand as still as a Norman Rockwell painting. A picturesque snapshot of bovine innocence…from a distance.


Be warned—it’s a façade. Those frightening four-leggeds are out to get me. 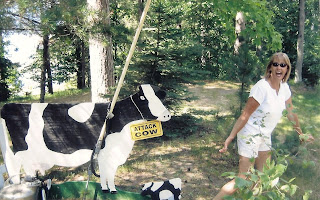 I know this because as soon as I get close enough, their big brown eyes stare into mine and a sinister sensation pulsates through me. The vibrations ripple through my heart like a pounding drum: I’m coming right for you!


I don’t have telepathic experiences with any other mammals in the animal kingdom, just cows. Well, and buffalo. I think it all started when I was sixteen and my older brother corralled me into helping him move cattle one fall. My parents were retired dairy farmers and had handed over the farm to my oldest brother. I was the “surprise” in the family…Baby Number Seven born when my mom was 49 and my dad 51. Even though we spent many weekends helping out on the farm, I was a town kid at heart and frightened of those big brown Herefords. Every time I neared the pasture, the entire herd charged toward the fence in a threatening posture, their brown eyes glaring right through me.


During the summer months the beef cattle grazed peacefully in the meadow, 240 acres that stretched along a lazy creek bed about a mile from the homestead. Before the snows hit it was crucial to bring the herd home in order to feed them through the harsh winter months. The cattle basically knew the routine, barnyard to meadow and back—or so my brother insisted—making it a simple task of directing them at certain turn points between.


It was a cool, gray November day when I found myself positioned next to the pickup at the exact spot the cattle needed to make a ninety-degree turn and cut through the field. “Just wave your arms and holler and they’ll head right for home,” my brother instructed, leaving me alone while he went to open the gate.


As the seconds ticked by I regretted my decision to help and longed for the safety of the paved streets in town instead of risking my life on a dead-end gravel road. It would be a dead-end all right, my own.


There was a slight rise in the road so my first and only clue in knowing the cows were heading in my direction was the brown cloud of dust and dirt that rose up, followed by the unmistakable sound of stampeding hooves. The thunderous roar of the approaching herd didn’t come close to the deafening sound of fear pounding in my chest. The tops of their heads appeared first as they came into view. It was my worst nightmare come true: a hundred head of Herefords descending on me at lightning speed. With every single set of brown eyes locked on my small frame, I did what every intelligent town kid would do and dove head first into the cab of the pick-up.


As best I can recall the nightmares started soon after. In some dreams two or three Holsteins are hiding around the corner of the house, waiting for me to come outside so they can attack. In another dream a single Hereford is in the house, hiding on the other side of the refrigerator, waiting for the right moment to charge. Even though I’ve lived in the suburbs for over twenty years, no place is safe.


It happened again this summer. My husband and I were riding his Harley through the scenic Wind Cave National Park in the Black Hills. I spotted the signs alerting visitors to watch for free-roaming bison in the park. Sure enough we came upon a large herd of buffalo that spread across the open range on both sides of the road. One big bull about twenty feet away lifted his head and stared straight at me. With his eyes locked on mine, his message came through loud and clear: I’m coming for you!


“Don’t stop!” I screamed, pounding my husband on the back.


Annoyed, he shouted back, “I’m only slowing down so I don’t hit one of them!”


Some people have gone so far as to imply that my fears are irrational, but I beg to disagree. This crippling fear that envelops me time after time is every bit real. I’ve concluded I must not be alone. After all, there are huge warning signs posted all over Minnesota roadways from some guy named Kemps: It’s the cows!

NOTE:  I should explain for any non-Minnesotans...Kemps is a popular brand of dairy products in the Minneapolis/St.Paul area.  They advertise a wide variety of very clever ice cream flavors with loveable cows dressed to match each flavor, posted on eye-catching billboards along with their slogan:  It's the cows!  My husband has worked in the grocery business for over 30 years, so I was pleased that I could actually tie in my fear of cows with products from his supermarket shelves!  :)


I sent this story to my penpal Amish sisters in northern Minnesota, knowing they'd get a kick out of it.  Sure enough, every letter I get from them now has stickers of cows on the envelope and stationery.  Cute, girls!