Granted, Hill City, South Dakota is a long way to go to visit with a book club, but since the hubby and I camp in the beautiful Black Hills just south of Hill City every summer, it was only a short ride into town from our campground.  Paula DeMars, Library Director of the Hill City Community Library, invited me to lead a discussion with their book club about Hidden Heritage...the Story of Paul LaRoche.

Since Paul, a/k/a Brule', has performed several times in the Hill City area, readers of the book were eager to hear a little more about Paul's family and their transition from Minnesota to South Dakota; from mainstream America to Native America. 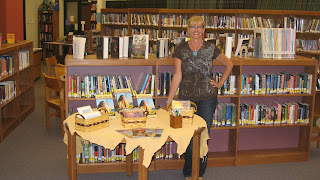 I chose five discussion points in the book:

1 - The prologue with Sister Mona Kirwan, the nurse who was in charge of the nursery when Paul was born and remembers both his mother, Arlene, and taking care of Paul as a newborn.

2 - When Paul and his family are returning to Lower Brule from Pierre on their first visit to the reservation, it is late at night on a gravel road that follows the Missouri River.  What did Paul, Kathy and their kids think, to see the reservation like that for the first time?

3 - The decision to include Chapter Five - The Ancestors Speak, which tells a quick review of the history of the Lakota people using Paul's ancestors listed in his lineage, including Paul's great-great-great-grandfather Strikes the Ree, an influential Yankton chief.

4 - The fact that Paul wants everyone to realize it took both worlds to create his story and his music; the love of his adoptive family and the heritage of his birth family, together created Brule'.

5 - The story of Hidden Heritage touches people on multiple levels:  race, culture, adoption, a love story, and following a dream. 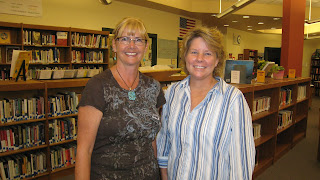 I thoroughly enjoyed meeting the members of the book club.  It was a wonderful evening, both with the discussion time and enjoying some tasty treats.  A great big "Thank you!" goes out to Paula and the Hill City Library for inviting me to speak to their group.  It was a fun evening!

Barbara
Posted by Unknown at 3:16 PM