Sundance, Wyoming...Town of One Author's Dreams

The hubby and I have been spending time in the beautiful Black Hills every summer since 2003 when we stayed in the historic Franklin Hotel, downtown Deadwood.  We were there to attend the grand opening of Kevin Costner's Tatanka museum, since Brule' was the guest performer for both day's opening festivities.  We followed that visit up the next summer with the Kevin Costner motorcycle ride from Sturgis to Tatanka, and another Brule' concert on the Tatanka property, overlooking the valley below.

Starting in 2005 we found a campground near Hill City, adding another day or two each year to stretch out our visit.  One year while studying the map I noticed the hills actually spread a short distance into the eastern edge of Wyoming.  The town of Sundance, Wyoming caught my eye.

Sundance...what a cool name!  It sounded so cool in fact, I told the hubby we had to check it out that summer.

We hopped on our Harley and took scenic Highway 16 west from Hill City into Wyoming, coming into Sundance from the south on Highway 585.  My expectations were high; it was Sundance, after all.  Sundance, Wyoming, even.  As we drove down Main Street I studied the typical store fronts, and I have to say they looked "ordinary."  Honestly, I was a bit disappointed.  The hubby turned and said, "This is where you want to live?"  I had to admit there was no magical sensation or pounding heartbeat to indicate this was anything other than an average small town, except for that fact Henry Longabaugh, a/k/a the Sundance Kid, did spend time in jail there once, thus the nickname that followed him. 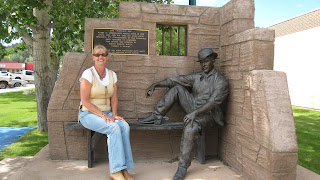 Me and The Kid, July 2010
Downtown Sundance 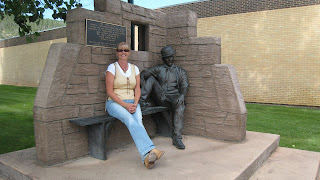 The famous Sundance Film Festival, however, is in Utah, where the celebrities and Hollywood types all flock each September.  Sounds exciting, but I think I'll stick to "my" Sundance in Wyoming, where my affection has re-blossomed having visited there several times now.  Situated at the base of the Bearlodge Mountains, Sundance has a picturesque backdrop that pulls you in and a quaint, western appeal I can't really put into words.  My dream is to one day have business cards that say:
Barbara Marshak
Author
Sundance, Wyoming

Until that day comes, however, my life is centered in plain ol' Minnesota where the hubby and I have good jobs, a nice home, lots of friends and close family.  Yeah, bottom line, I'm pretty lucky to be right where I am.

Barbara
Posted by Unknown at 12:33 PM

Do you have any pictures to share of Kevin Costner?

I do, but my scanner's not working right tonight. Both of the Tatanka trips were "pre-digital" so I don't have them on my computer.

barb! you always look like you're havin so much fun!