In order for me to get a clear picture of what it's like for Officer Joaquin Guerrero and his K9 partner Rookie II to work Saginaw's dangerous night streets, I decided to make a trip to Saginaw to join him on a couple ride-alongs.  Having worked at the Lakeville Police Department for seven years of course, I felt I had the experience necessary to serve as Joaquin's crime-fighting partner for two nights.  Picture Annie Frost, US Marshall on the new NBC show "Chase".

You can probably see where I'm going with this, the resemblance is obvious...blond(ish) hair pulled back, black vest, a serious, lets-get-down-to-business attitude.

﻿ ﻿
﻿
One important factor to keep in mind is that the difference between Saginaw and Lakeville is like comparing Mayberry to Detroit.  No kidding.  Lakeville has virtually no violent crime and Saginaw has ranked #1 the last ten years for having the worst violent crime per capita in the country.  Joaquin reassured me, however, that's due to the high number of shootings, not necessarily homicides.  When it comes to police stats, there is a difference.  Nonetheless, Joaquin advised me to wear a bulletproof vest and I complied.

The Saginaw PD operates on 12-hour shifts, so we reported in Friday afternoon for the Umbrella shift, 3:00 pm to 3:00 am. 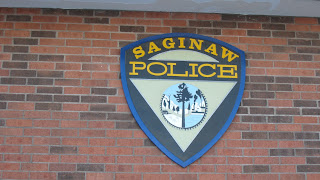 As it turned out, the weather played a big role in my weekend visit to Saginaw.  Michigan had just been hit with the massive winter storm that covered most of the country, and dumped over a foot of snow on Saginaw, followed by more blowing, drifting snow.  (Poor Joaquin even got stranded on the road and had to sleep in his squad the previous night!)  Because of the winter storm Joaquin advised it would probably be quieter than usual.  I filled out the ride-along paperwork while Joaquin checked in with the sergeant on duty. 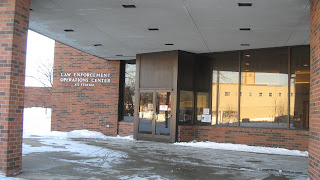 Friday Night Ride-Along:  Looking back, I'd like to consider this my "practice" night, only because everything that could go wrong, did go wrong.  I had packed all my necessities--notebook, pen, camera, brush, money, sunglasses, chapstick, etc--in my bag and placed it on the floor by my feet, thinking I would need everything within easy access.  The first course of action was for Joaquin to show me some of the pertinent sites around Saginaw, on both the east and west sides of the Saginaw River.  It was a good idea, except only the main streets were plowed, leaving all the side streets plugged with snow.

Unfortunately Joaquin's K9 squad (a 2-wheel drive Tahoe) didn't handle well in the snow.  Each time he sped up, the back end would slide and spin all over the road.  Every intersection meant a quick stop, slide some, take off, slide more.  This was then repeated over and over as we cruised throughout the city.  Meanwhile I start taking notes, forgetting that writing and riding in a car is not a good combination for me.  Next thing I know my stomach is doing flips.

While I was thankful for the bulletproof vest, I knew right off the bat it was NOT meant for a size DD.  My chest was crushed with each breath.  By then I was too hot, so I took off my outer vest.  We got our first call, a domestic, and Joaquin raced to the address.  We pulled up to the house and Joaquin advised that it was safe for me to join him. As I opened my door, my boot caught in my bag and I flew head-first into the snowbank with the contents of my bag spilling onto the snow-covered street.  (Thankfully Joaquin was on the other side of the Tahoe and couldn't see any of this.)  By this point I'm feeling more like Barney Fife than Annie Frost.  I gathered my things, brushed off the snow, and acted like nothing happened.  Except now I'm cold and wish I had my vest back on.

A short time later the domestic was resolved, without an arrest.  We hopped back in the truck, and after a few more slip-and-slides in the snow, my face is a lovely shade of sage green and I confessed to Joaquin I was car sick.  End of ride-along #1 for Barbara "Annie" Marshak.


Later, when things were quiet Joaquin and Rookie took me to their nightly stop at the drive-through of Tim Horton's, a fast-food bakery and sandwich shop. 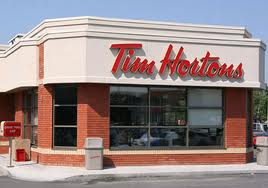 Joaquin pulled up to the speaker and the girls inside said, "Welcome to Tim Horton's...can I take your order?"  That was Rookie's cue.  "Rouw, roouw, rouw, rouw!" he responded, barking out his order.  The girls said, "Hi there, Rookie!  How you doin' tonight hon?  You want your Timbits?" (a/k/a doughnut holes) 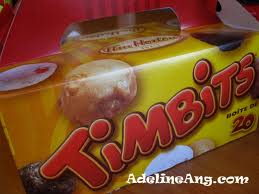 Rookie barked again, "Rouw, rouw, rouw!" (which meant Yes!) We pulled up to the window and the girls inside all come over to the drive-though window to see Rookie.  They hand Joaquin a little box labeled "Rookie bits" for his nightly treat.  Cutest thing I ever saw, promise!

Then it was back to work...we answered more calls and cruised the city streets while Joaquin told me more about the history of Saginaw.

﻿
﻿  ﻿
﻿ Saginaw was once part of Michigan's big car industry, although many of those plants are now closed.  Joaquin shared what it's been like to be an officer in Saginaw for the past 22 years and how much the city and demographics have changed through the years. 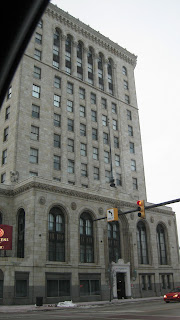 And so our Saturday night came to an end on a much more successful note.  I didn't fall out of the Tahoe, I didn't get car sick, and I managed to stick it out for the whole 12-hour shift.

End of PART I - trip to Saginaw, Michigan.

Oh Barb, how fun! I was laughing WITH you, not at you!!! This sounds like it will be a great book! (And you can still write one about Rookie, too!!) ;-)

I appreciate that Becky, about laughing WITH me, not AT me--there is a difference!! :)

What an adventure! Can't wait to read more.