In continuing my research for “Michigan & Rookie” I returned to Saginaw last week to take training one step farther than mere police work.


This time I tagged along with Officer Joaquin Guerrero and Rookie II down to Wayne, Michigan (on the west edge of Detroit) to K9 Academy with Master Trainer Terry Foley. A total of 58 K9 handlers from all over Michigan show up at Terry’s facility five days a week, from newbies just starting out to seasoned handlers like Joaquin. Terry starts out each session by having handlers talk about any K9 issues, which gives officers a sense of support they don’t often have in their own departments.
Different types of training go on simultaneously, depending on the level of the handlers. Joaquin suggested we hook up with 2 brand new handlers at Lower Huron Park to do a straight-line track, which made sense since it was my first day of K9 training too.


#1 Rule in Tracking:  training goes on despite the weather. This is the nitty-gritty world of police work—rain, snow, mud, whatever, you train in all the elements.

I learned that obedience is key to all areas of training. And it’s not as easy as it looks. If you’re right-handed you have to use your left hand to switch between the tracking harness, leash, and long lead in order to keep your right hand free for your weapon. Added to that is the timing of commands and praise to the dog.
After a couple hours sloshing through wet grass, we took a break for lunch and then met at an empty school used for building searches and narcotic finds. Trainers come up with various scenarios and play different roles: Bad Guy, Back-up, Decoy.
#1 Rule in Searches: when the handler sends the dog, make sure you stay BEHIND the handler so the dog doesn’t mistake you for the Bad Guy. 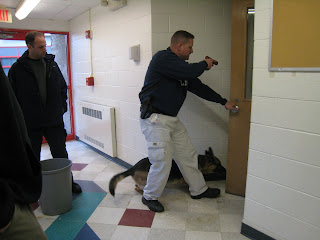 The atmosphere among officers was somewhat subdued by the loss of a Michigan State Trooper early that morning. Trooper Jeffrey Werda, from the Bridgeport Post near Saginaw, was killed in an on-duty rollover crash. Trooper Werda had responded to assist the Saginaw County Sheriff’s Department in pursuit of a suspect who had fled from deputies. Flags were lowered to half staff in honor of Trooper Werda…another reminder of the constant danger facing law enforcement officers.


Terry’s goal at the academy is to train handlers for situations that officers see on a daily basis…and prepare them for the worst. Terry speaks from experience…24 of his 29 years are in the K9 field, a career that includes three full-service dogs. As a Master Trainer his objective is to have every K9 officer become an expert in:
#1 Motivation for Becoming a Handler: love for the dog.

Training dogs is as art; handlers learn to read the dog…and ultimately trust the dog. A canine is the only “tool” that police officers can’t put on the shelf when they go home at night. SWAT officers have told Terry that K9 training is 10% harder than SWAT.


#1 Interesting Fact: a canine is the only “bullet” an officer can send out…and call back.

For more information on K9 Academy & Training Facility, go to www.K9ATF.com
The day ended with a drive home in the pouring rain, a two-hour drive Joaquin and Rookie II make every other week in order to continue their ongoing training.