Back in 2009 when I finished writing "Seeds of Salton" I hired Susanne Lakin from Santa Cruz, California to do a content and copy edit. Nervous about how "critical" her comments might be, she calmed my nerves by displaying a genuine interest in my manuscript right from the start. She connected with the story and really "got" my protaganist. Knowing that, when it came time to read Susanne's edits I was receptive to her words, thankful for the instruction she provided. Her expertise helped me add the missing components and end up with a polished manuscript.

In 2011 Susanne started a new website, dedicated to helping writers called Live Write Thrive.  Here's what she says: "I love to help writers with their novels. I specialize in thorough annotated critiques, so if you have a manuscript that needs some work or you’re not sure if it does, check out my site specifically dedicated to my critique services. You’ll find a lot of informative articles on why you might need a critique and how to choose the right editor for your needs."

If anyone out there is in need of a good editor, I would highly recommend Susanne...I'm just saying!  This month I'm honored to have my writing journey featured on her client page at www.LiveWriteThrive.com. 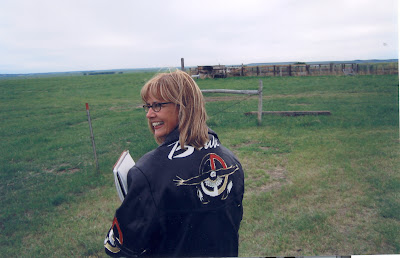 My writing journey began in a most unexpected way, what some might call a chance encounter. On a family vacation in the Black Hills of South Dakota one summer we happened upon a Native American band playing in the tourist town of Deadwood. The music from Brulé, a small, upcoming band of three, was as captivating as the surrounding landscape. Their distinct sound initially caught my attention—the hauntingly beautiful mix of flute, keyboard, and traditional drum they are now famous for. Listening one could immediately sense something deeper at the heart of it. Sure enough, in reading about Paul LaRoche, the band’s founder, I found his life story equally captivating.

All the way back to Minneapolis I heard a voice, You should write a book about this man…
But before I reached home a flurry of doubts drowned out the voice, telling me I had no connection to Paul LaRoche, a complete stranger. I wasn’t Native American or adopted, and furthermore I didn’t have any writing credentials. The loudest doubt pushed through time and time again: You’re not a real writer; you’ve never even been published! Yet each time I listed to Paul’s unique music, the voice returned.

Three years passed before I dispelled the doubts and found the courage to respond…and as soon as I did, an amazing journey began. First came an article about Paul, published in a regional magazine. Next came the book, a project that took three years to complete. Hidden Heritage: The Story of Paul LaRoche was released in 2006. That summer Paul invited me to join him at several Brulé events. None was more moving than at Mount Rushmore National Monument. I stood on the park’s plaza, the majestic granite monument in the backdrop, the beautiful Brulé music playing in the mountain air, signing books alongside Paul. It was a moment I never could have imagined seven years earlier on Main Street Deadwood. I had only a few moments to listen as Paul played. We didn’t even speak. Yet God intertwined our otherwise separate lives and gave us a connected purpose, a purpose that didn’t end there.

While writing Hidden Heritage I discovered Paul’s great-great-great grandfather, a Yankton chief named Strikes the Ree (1804-1888), was an important figure in American history. In 1804 Lewis and Clark were camped at Calumet Bluff when word came that a baby had just been born. The famed explorers wrapped the infant in a flag and declared that he would someday be a great American citizen. Their prophecy indeed came true. Strikes the Ree was a great leader among his people and played a significant role as a peacemaker during the Great Sioux Uprising. During his life he traveled to Washington DC and received peace medals from three US presidents. Worthy of an epic tale, I’ve since learned the great burdens the chief bore during the years of cession and settlement on the Northern Plains have largely been overlooked by historians.

Long after I finished Paul’s book, Strike the Ree’s story called out to me time and time again. A few weeks ago I read a post from author/speaker Page Lambert titled “Write Brave, Write Epic”. Her words challenged me: Be brave. Write the BIG story. Be fearless in your belief that yes, we can set aside our smallness and our frailties and reach for that deeper part of ourselves that knows there are GREAT TRUTHS in this world, and it is these truths about which we must write.

I believe the Hidden Heritage journey has led to this important, historical book. God has equipped me—through all that’s happened since I stood on that crowded sidewalk in Deadwood thirteen years ago—to write this epic novel and I can move forward with confidence. Chance encounter? Hardly. Every step declares it is God’s divine plan, a journey that is far over.

My character, my very nature is to go about life in small, cautious and predictable steps. I'm a planner, an organizer. I follow rules. So when I started writing, I continued in that manner, the old "write what you know" concept, writing little stories from my hometown in Northern Minnesota. Then one day I heard a radio broadcast from Bible teacher Chuck Swindoll that challenged me to think in a new way. His words struck a chord with me and I wrote them in my Bible: "Break me free from the limitations and expectations surrounding me. A spiritual life is lived with gracious uncertainty and breathless expectation. Yes, Lord--take me on an adventure!"

Funny, as I continued to read those words, I began to believe them...sensing something exciting on the horizon. Next thing I knew I was on a Native American reservation in the middle of South Dakota doing research for "Hidden Heritage", my first book.

And that was just the beginning...

To see more about Page Lambert or Susanne Lakin, please visit their websites. These are two ladies that I really respect and admire!
www.PageLambert.com
www.LiveWriteThrive.com or www.cslakin.com
Posted by Unknown at 10:04 PM