The role of a step-parent is different than a parent; more like walking a tightrope with tiny, cautious steps, not wanting to be too harsh or too easy; attentive to fragile feelings; aware of issues before any danger signs appear on the horizon and the safety net is needed.


When our blended family was still fairly new, we tried our best to entertain all six kids at home. Taking a family of eight to a movie or out to eat was rough on the pocketbook and the satisfaction was short lived. We chose instead to get each child a bicycle, and put up a swing-set play system. Although intended for David, the older kids enjoyed playing with him on it. The trampoline was an instant hit with the entire neighborhood. The kids spent hours on the tramp—spring, summer and fall—taking turns and practicing new stunts. They had the most fun when it was hot enough to jump with the sprinkler underneath. 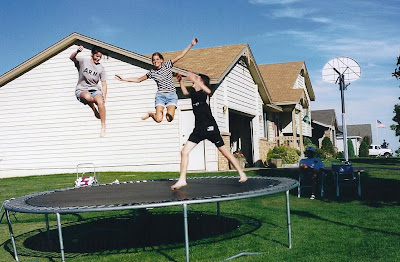 And like all parents, we tried to instill a sense of responsibility to take care of the things we bought them. So I was a bit surprised when a phantom child moved into our house one weekend when all the kids were home. This difficult child showed up at the most inopportune times, and then whoosh! vanished in an instant, hiding his true identity.


“Who left the bicycle in the street?”


“Who broke the new tennis racket?”


“Who spilled pop on the carpet?”


So there I was, alone with this phantom child while everyone scattered to safety. Unless I knew for sure who-had-done-what, I didn’t want to accuse the wrong child of a misdeed. Many times I found myself cleaning up the mess Not me! had left in his wake.


I finally wised up, realizing I didn’t have to let the kids’ visits be all play time. I created charts for simple household chores, and John brought them to our business and assigned jobs for them.


In the evenings, when things were quiet, I tried to be aware of the kids’ feelings. If one was unusually quiet and needed space, I understood. If another one was eager to share something on their mind, I wanted to take time to listen.


As time went on, the kids offered to pitch in and help with projects, and even asked if they could “work” at the store. Not me! eventually moved out of our house. My guess is he moved in with another unsuspecting family and that was just fine with me.