As some of you may know already, Paul LaRoche and the Brule' gang are booked full-time in Branson, Missouri at the beautiful RFD-TV Theatre starting March 2010.  Their extended concert run in Branson means they had to move from their home-base in Sioux Falls, South Dakota to Branson.  And while it might seem a bit strange for them to leave South Dakota, Paul and crew are thankful for a full-season performance schedule in one of America's most popular tourist stops.
Moving the entire Brule' entourage to Branson--which includes 18 people by the way--also means upcoming episodes for Hidden Heritage-The TV Series will be produced from their new home-base.  When Paul asked me to come to Branson last week to assist with the interview for Episode #15, I said sure.  Then I realized it was "off-season" and airfare to Branson was INSANE!   So I called up my sister Norma and dared her to come on a roadtrip to Branson with me while she was still 69!  (Her 70th birthday is March 22nd!)  Being the good sport that she is, she signed up to go...and off we went.  We didn't see much of Iowa either way since it was covered in thick, soupy fog that made driving quite stressful.  Even worse, we drove 640 miles straight south to southern Missouri only to endure cold, misty, windy weather--so not fair!

Upon arriving in Branson, Norma and I were happy to discover a Panera next door to our hotel.  Needless to say, we started every morning there!  Branson was quite an interesting town, think Vegas/Orlando/Nashville.  There were tons of theatres everywhere and I must say the RFD-TV Theatre was a beautiful facility, inside and out.  The photo of the Brule' gang on the big marquee outside looked impressive--and should draw in a number of tourists with that alone. 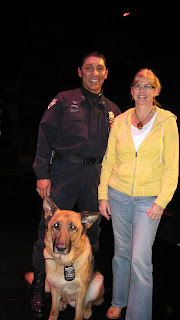 Norma and I didn't have time to do much sight-seeing, after all I was there to work.  The theme of Episode #15 is one where we feature a Native American hero story.  This episode features Officer Joaquin Guerrero from Saginaw, Michigan, a Mexican Indian man just happens to have another incredible life story.  Officer Guerrero created Precinct 131, a program designed for young children to say "no to guns, gangs, drugs, and violence."  He has worked the night shift in Saginaw for 21 years and feels it's his calling to work the dangerous night streets.  After meeting Joaquin, it is easy to see that he is a man with a very giving heart.  A man whose life story--God willing--will be my next book.  In fact, my working title is "Michigan and Rookie...Guardians of the Night", a remarkable story of a cop and his K-9 partner Rookie, dedicated to serving their community as the eyes and ears of the night.
It was fun to meet both Joaquin and Rookie and assist Paul and Shane with the interview process.  I do know that you won't want to miss this episode of Hidden Heritage, scheduled for June 7, 2010 on RFD-TV.

I want to give a special "thank you" to my sister Norma for going with me on the roadtrip to Branson while she was still a young 69 years of age!
Barbara
Posted by Unknown at 8:34 PM