Michael Franzese - The Good, The Bad, The Dinner

As I shared in the last post, the hubby and I fixed dinner on Saturday for former New York mob boss, Michael Franzese.  Cooking for a former crime boss put a little pressure on the cooks, of course, wanting to keep our guest of honor happy.  We had about 20 people over, including the couple from our church (Jerry & Muff) who had heard Michael Franzese speak in Florida and arranged to have him come to Lakeville.  The hubby came up with a menu that I thought sounded more like a Meat Fest:
When John announced the menu to all the guests, Michael said, "Well that sounds good John, but next time I come can you expand the menu a little?" 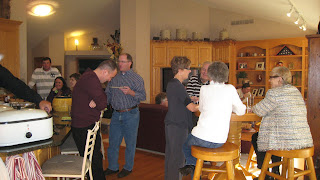 Everyone enjoyed a nice relaxing afternoon, visiting with Michael and his brother-in-law, Dean Garcia, who travels with him to most of his events.  Both men said they appreciated a home cooked meal, versus going to a restaurant.  The dinner went over well, and to my surprise, nearly everything was eaten! 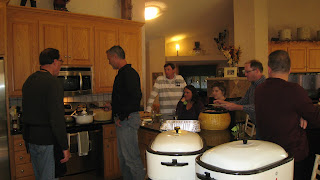 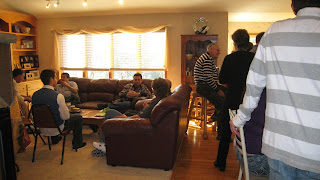 Of course the real purpose of Michael's visit was to share his unique and compelling story.  No one walks away from the mob and lives to tell about it.  But in 1993 Michael Franzese broke all the rules by walking away from the mob--and through a woman of faith--became a changed man, transformed by God.


﻿﻿ ﻿﻿
﻿
﻿
A one time captain in the La Cosa Nostra, Colombo crime family in New York City, Michael spoke to full-house at Trinity Evangelical Free Church and received a standing ovation all three times.  His story is captivating.  Chills up your spine, captivating.  In 1986 Fortune Magazine listed a ranking of "the 50 biggest Mafia bosses" in New York's crime families and Michael was rated #18, the youngest man on the list.  As Michael states, "the mob life is a very violent life and when you're part of the mob, you're part of the violence."  Today of those 50 men, 43 are dead, 3 are in prison, and Michael is out of prison, free to share his remarkable story of forgiveness with audiences all across the country.  It's a testament as to how God can change a man's heart--from the dark and deadly world of the La Cosa Nostra--to a man on a mission with a message he calls, The Good, The Bad, The Forgiven.


﻿
Thank you Michael, for taking time away from your family to travel across the country and share such an incredible story.

Barbara
Posted by Unknown at 6:43 PM